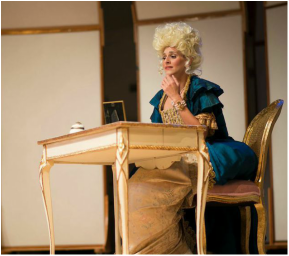 A native of Miami, FL, Mrs. Henriques Haak began her vocal studies at age thirteen and has performed such roles as Pamina in Die Zauberflöte, Isabela in La Hija de Rappaccini, and Ms. Wordsworth in Albert Herring at the University of Illinois.  She has also performed as Casilda in Gilbert and Sullivan’s The Gondoliers and Virgin Mary in the Ramon Dominguez’s world premiere of Bernadette in Lourdes, France. She has held partial roles including Zerlina in Mozart’s Don Giovanni, Muzetta in Puccini’s La Boheme, Ella in Gilbert and Sullivan’s Patience as well as Mabel in Pirates of Penzance. Rebecca also had the opportunity to attend the Barcelona Festival of Song in the summer of 2007, performing Latin American and Spanish repertoire. She was a recipient of an Encouragement Award in the Metropolitan Opera National Council District Auditions.

In addition to her classical career, Henriques Haak holds a Doctorate of Musical Arts (D.M.A.) from the University of Miami.
Proudly powered by Weebly